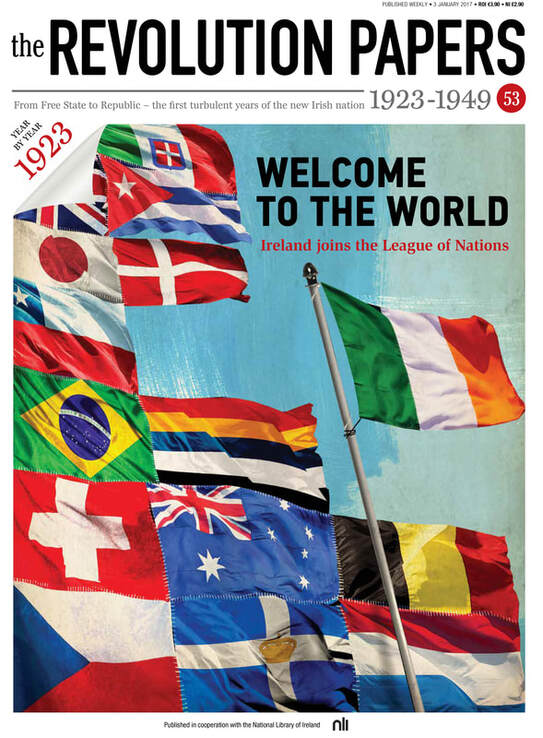 The Revolution Papers was an independent publication produced by Albertas Ltd that charted Irish history from 1916-1949. The publisher wishes to thank the Centre for Contemporary Irish History, Trinity College Dublin, the National Library of Ireland, the Newspaper and Periodical History Forum of Ireland, the British Library, the Irish Military Archives, Find My Past, Newsbrands and Local Ireland. The series, which sold almost 2,000,000 copies, ran from December 2015 to January 2018 and was edited by Steven O'Connor (Parts 1-52) and Ian Kenneally (Parts 53-101).
Further details on the series can be found on the Revolution Papers site.

The Easter Rising of 1916 was the beginning of a remarkable period in Irish history. The subsequent seven years brought the War of Independence, partition, the Anglo-Irish Treaty, the Civil War and the foundation of two Irish states. During its run, the Revolution Papers followed these extraordinary events bringing readers the most important Irish newspapers from that time, reprinted as they appeared. Each edition provided a comprehensive selection of full-size, facsimile newspapers, allowing readers to read about the news as it was happening, just as our grandparents and great-grandparents did. Included with each edition were national and local newspapers; republican, nationalist and unionist newspapers; banned newspapers; even Irish newspapers from America. The Revolution Papers also covered the Irish story over the subsequent two decades, bringing the reader through the 1920s and1930s, as the Irish Free State asserted its independence in a dangerous world. The series continued through the Second World War, concluding with the foundation of the Republic of Ireland in 1949, providing readers with a glimpse of what life was like during that tumultuous era.