Courage and Conflict: Forgotten Stories of the Irish at War 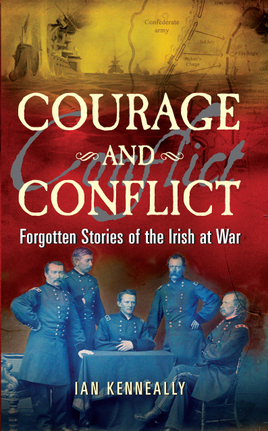 Courage and Conflict contains an exciting mixture of stories of Irish people in war at home and abroad. Many of the extraordinary histories within this book have been forgotten, others are being told for the first time, while some are retold based on new evidence or new interpretations that have emerged in recent years. Below you can find a brief outline of its contents but, if you click on the drop-down menu above, you will see much more information on individual chapters within the book:


Ultimately, Courage and Conflict is a collection of stories on Irish people living through dangerous and dramatic times. These stories portray some of the triumphs and the tragedies, the heroism and the brutality, of the Irish at war.

Some Reviews of Courage and Conflict

‘the scholarship is accurate and there is an air of enthusiasm that is engaging...I particularly enjoyed his account of the San Patricios’ – John Kirkaldy, Books Ireland

‘Kenneally's recounting of the Battle of Little Big Horn in Montana, for example, is not only one of the most accurate but also the most exciting of the accounts that I have read...it is a lively well-researched history that pulls no punches.The book is a valuable addition to the library of any serious reader of Irish history.’ - Dr. Michael Hogan, author of The Irish Soldiers of Mexico

‘Courage and Conflict is an engrossing study of Irish military exploits around the world over the last two centuries’ – Seán Carberry, Ireland of the Welcomes