'He was born in the county of Wexford in Ireland But America was the object of his patriotism and the theatre of his usefulness. In the Revolutionary War which established the Independence of the United States he bore an early and active part as a captain in their Navy and after became its Commander-in-Chef. He fought often and once bled in the Cause of Freedom.'

- An extract from Barry’s original epitaph as written by Dr. Benjamin Rush, a signatory of the American Declaration of Independence.

John Barry, 'Father of the United States Navy'
- Overview of chapter one of Courage and Conflict 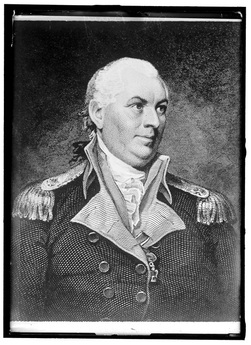 John Barry, one of the most important naval commanders in the Revolutionary War and in the formation of the US navy (US Library of Congress).
‘Commodore Barry is impressive, no matter what you say, but he's one of these unknown figures in our history,’ so said the acting US Ambassador to Ireland, Robert Faucher, at a ceremony in Wexford during June of 2009. John Barry was a hero of the American Revolution but in the past century he has slipped from memory, his reputation almost totally eclipsed by that of his contemporary, John Paul Jones. However, new research has done much to confirm Barry’s status as a sea-captain of brilliance. Barry arrived in Philadelphia during the 1760s and was quick to establish himself as a merchant sailor, gaining his first captaincy aged only twenty-one. Yet, it was during the American War of Independence that Barry’s name was to become famous. Barry was one of the first captains in the new Continental Navy but it was a navy in name only as the American fleet paled in comparison to their British opponents. Despite these unfavourable odds, Barry would have a string of successes beginning when his ship, the Lexington, sank the British warship Edward. It was the American’s first naval victory of the war.

This piece can give only a brief glimpse of Barry’s career but some of his exploits became legendary among the revolutionary forces. On one occasion he and 27 crewmen captured the British Mermaid, the Kitty and the warship Alert. On hearing the news, a delighted George Washington wrote to Barry to commend the captain ‘on the success that has crowned your gallantry’. Such triumphs exemplified Barry’s bravery and his extraordinary resourcefulness. It was these qualities which resulted in Congress giving Barry a number of other vitally important commands during the war, including ferrying American diplomats to France. Although Barry was lucky to survive many engagements with the enemy, he successfully carried out nearly all his missions.

After Independence, Barry continued to have a long and illustrious career and he would fight more wars for the United States, while continuously working to improve the US navy. In so doing, he established himself as the foremost captain in the fleet and Barry left a legacy that would last long into the future. By the time of his death in 1803, he had developed a naval force that could protect American shipping around the globe and had trained and commanded most of the navy’s top officers. It is in the words of these contemporaries that Barry’s name gleams most brightly. It was from fellow captains that he received the title of ‘Commodore’ and through them he also became known as the ‘father of the United States Navy’. Throughout his military career he had retained a reputation for treating his crews and his many prisoners well and on his death a newspaper said of Barry: ‘His naval achievements of themselves, have reflected much honour on his memory, but these could not have endeared him to his fellow citizens had he wanted those gentle and amiable virtues which embellish the gentleman and ennoble the soldier’. Courage and Conflict tells Barry’s story and explains why he deserves to be remembered.
Return to Courage and Conflict