'Dear Sister, I take the preasent oppertunity of letting you no that I will soon be on the move again. We are to start the 10th of this month for the Big Horn country. The Indians are getting bad again. I think that we will have some hard times this summer. The old chief Sitting Bull says that he will not make peace with the whites as long as he has a man to fight…Give my love to Sister & Brother Jonny. Remember me to your husband. As soon as i got back of the campaign i will rite you. That is if i do not get my hair lifted [scalped] by some Indian. Well i will close, so no more at preasent.' 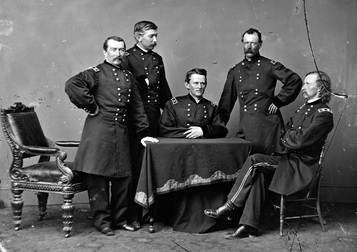 General Philip Sheridan is standing on the far left with George Armstrong Custer seated on the far right (US Library of Congress). Sheridan was one of the architects of the campaign against the Lakota and Cheyenne. Around one hundred Irish born soldiers fought with the Seventh Cavalry at the Little Bighorn.
The Battle of the Little Bighorn will be remembered forever because of the great victory of the Lakota and Northern Cheyenne over the Seventh Cavalry. Millions of words have been devoted to the events of those June days in 1876 and historians still debate the controversies of the Little Bighorn and the ultimately disastrous consequences for Native Americans. The fate of one man, George Armstrong Custer, has outshone the stories of the hundreds of men who died under his command. It has outshone the story of the Lakota and Northern Cheyenne who punctuated their long defeat with this brave and stunning triumph. Those stories have only recently been told and here we will look at some of the Irish who fought and died in the battle. The US army, at this time, was largely made up of immigrants and, as so often throughout the Nineteenth Century, Irish and German soldiers would form the bulk of these recruits. In Ireland and the US, Captain Myles Keogh from Carlow is usually remembered as the sole Irish soldier in the battle but around one hundred Irish-born soldiers (out of a total of around 600 troops with Custer) fought at the Little Bighorn. Keogh, like T.P. Eagen whose letter is quoted above, would be killed but many others lived to build a new life in United States.

This short article can give only a flavour of the stories contained in Courage and Conflict but one Irish soldier who survived was Daniel Newell. Born around 1847 in County Roscommon he emigrated to the United States in his early twenties. On the first day of the battle Newell was part of Company M, one of three companies that George Custer had assigned to Major Marcus Reno. It was these troops who were to lead the charge into the Indian camp. This attack turned into a disaster and in the ensuing retreat Newell was wounded by a bullet to the left thigh. He still managed to fight his way across the Little Bighorn River and reach the summit of a nearby hill. Here, with the other survivors, he formed a makeshift defence through which the besieged soldiers protected themselves for two days. By that stage, Custer had made his Last Stand at the other end of the battlefield. Newell later settled in Sturgis, South Dakota, where he developed a successful blacksmith’s forge. He was one of the few surviving soldiers to attend the fiftieth anniversary commemoration of the Battle of the Little Bighorn in 1926.

Courage and Conflict tells the story of all the Irish at the Little Bighorn by explaining who they were and why they joined the US army. How was it that Irish soldiers, most of whom were forced to emigrate from Ireland, would find themselves fighting and dying in a battle whose aim was to force the Lakota and Cheyenne back to their assigned reservations? It delves into the course of the battle to explain the key role played by Irish soldiers, from high-ranking figures like General Philip Sheridan to Thomas Callan, a private from County Louth. Callan would later win a Medal of Honor for his actions at the battle and his story is one of the many explored in Courage and Conflict.
﻿﻿﻿Return to Courage and Conflict﻿﻿﻿