From the Earth, A Cry: the Story of John Boyle O'Reilly 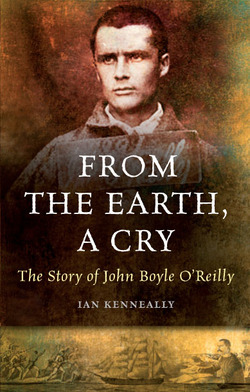 John Boyle O’Reilly (1844-1890) was a remarkable historical figure: a man who was an internationally renowned journalist, writer, and civil rights activist. Born in Meath, O’Reilly later worked in England before joining the British army. Ostensibly a proud soldier, O’Reilly lived a double life as a recruiter for the revolutionary Irish Republican Brotherhood. He was discovered and convicted, serving time in a succession of prisons from Mountjoy to Dartmoor. He was eventually transported to the Penal Colony of Western Australia from where he made a spectacular escape to the United States.

It was in the US, during a period of intense economic and social turmoil, where O’Reilly’s brilliance flourished. As editor of The Pilot, a Boston based weekly newspaper, he was a powerful advocate of the rights of workers and African-Americans. O'Reilly became a critic of the Fenians following his involvement in their failed attack on Canada during 1870. However, he retained a strong commitment to Ireland and was an important part of the Land League and Home Rule movements, working closely with Michael Davitt and Charles Stewart Parnell. A good friend of John Devoy, O’Reilly played an important part in the organisation of the famed Catalpa rescue. In tandem with his journalism O'Reilly was one of the most famous American literary figures of his day, publishing four volumes of poetry and two novels.

A complex and charismatic personality, O’Reilly’s popularity transcended race, religion and nationality. Among his friends and contemporaries he could count figures as diverse as Walt Whitman, Wendell Phillips, Oscar Wilde and Jeremiah O’Donovan Rossa. O'Reilly would be remembered as a great and generous man but, in later accounts of his life, he was often dismissed as a 'dreamer' and safely de-politicised through selective use of his writings.

Memorials to his life were erected in Boston and Ireland but as the years passed the historical memory of O’Reilly became fractured. He diminished, became smaller than the sum of ﻿his parts. O’Reilly’s poetry was remembered fondly but the social commentary which underpinned his musings was often overlooked. O’Reilly’s role as a pioneering civil rights activist was ignored outside of African-American communities. Based on research in Ireland, England, Australia, and the United States, From The Earth, A Cry is a compelling account of an extraordinary﻿ life. More information on O'Reilly's life and the book can be found in the drop down menu at the top of the page.

Some Reviews of From The Earth, A Cry

‘Kenneally is more than equal to capturing this complex man. The book is well written and well researched...I read the book at a sitting and was enthralled’ ﻿–﻿ John Kirkaldy, Books Ireland

‘The latest publication on O'Reilly is the best yet...It is an inspirational book and richly detailed, giving a real understanding of the man at the heart of it all’ – Drogheda Independent

‘Meticulous in his research, Kenneally can recount history in a manner that excites his readers, rather than lecturing to them. And so it is in his latest offering’ – The Wild Geese

‘It's fluidly written with a striking insight into the mind-set of the man who transformed himself from soldier, to convict, to editor of the The Pilot newspaper’ – SIN, Galway University Newspaper