_'Return and tell your commander that we are Irishmen and we hold this citadel for God and the Pope'. The Irish who serve the Pope are ready to die and not to surrender.' 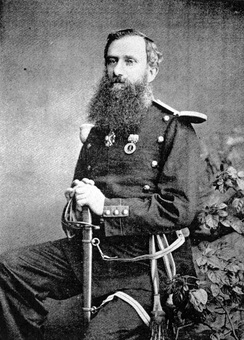 By 1860, all that was left of the Papal States was a section of central Italy. Early in that year the Pope, Pius IX, made a call to the Catholic countries of Europe to send troops in support of the Papal States, so as to protect the States from the neighbouring region of Piedmont. It was a call that was heard in Ireland and within weeks over 1,000 Irish troops had signed up to fight for the Papacy. Commanding these soldiers was 35 year old Myles William O’ Reilly from Louth, a well-known figure in Ireland. The troops themselves had little military experience being a mixture of ‘some peasants from the fields, some farmers, clerks, medical students, lawyers…some old soldiers, some militia men and some Royal Irish Constabulary’. By the beginning of that summer Reilly and his men were in Italy but the army they had joined was in a perilous state. The Papal army was an ad-hoc mixture of different nationalities with not enough officers or weapons for its 17,000 soldiers.

The Irish soldiers were especially badly equipped and to make matters worse the Irish Battalion was divided into a number of differing contingents. Over the short war of 1860 the Irish would fight at the sieges of Ancona, Perugia and Spoleto as well as at the battle of Castelfidardo. Myles O’Reilly, at Spoleto, would prove to be a very capable commander and Irish troops across the conflict would win praise for their performances in battle. Indeed, the commander of the Papal army, at the war’s end, lauded them as the most important component his army, saying that he had ‘the liveliest satisfaction in being able to express to those soldiers his entire satisfaction and bestowing on them the highest praise for their conduct’.

Courage and Conflict brings to life the story of the Irish Battalion by explaining who they were and why they fought for the Papal States. It follows their time in the Papal army and describes their battles. Ultimately it would be a futile war, with the Papal army utterly outmatched by its Piedmontese opponents. Yet, the soldiers of the Irish Battalion learned much from their experiences. After the war many of them would go on to have distinguished careers. O'Reilly became a leading politician in Ireland while others such as John Joseph Coppinger achieved great success in the United States army. Undoubtedly, the Battalion’s most famous soldier proved to be Myles Keogh from Carlow who fought at Ancona and later travelled to America. He survived the American Civil War but was killed at the Battle of the Little Bighorn. Of all the wars in which Irish soldiers have fought, the history of the Irish in the Papal army has been almost completely forgotten. In many ways it is a strange tale but it is certainly one worth telling.
Return to Courage and Conflict