'The Republic that gave us asylum and an honorable career, - that is the mainstay of human freedom, the world over – is threatened with disruption. It is the duty of every liberty-loving citizen to prevent such a calamity at all hazards. Above all it is the duty of us Irish citizens, who aspire to establish a similar form of government in our native land.'

﻿'I ﻿believe the North is about to wage a brutal and unholy war on a people who have done them no wrong, in violation of the Constitution and the fundamental principals of the government. They no longer acknowledge that all government derives it's validity from the consent of the governed.'

North and South: Irish Soldiers of the American Civil War
- Overview of chapter four of Courage and Conflict 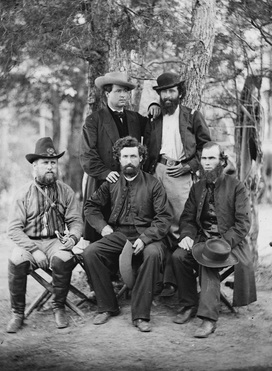 Some members of the Irish Brigade of the Union army at Harrison's Landing, Virginia, during the summer of 1862 (US Library of Congress). At the back left stands Father Patrick Dillon CSC. On the right stands James J. McCormick, Quartermaster of the 63rd New York. Seated on the right is Father William Corby CSC and in the middle, Father James Dillon CSC. The seated figure on the left has been tentatively identified as Captain Patrick Clooney, who was killed at Antietam. Thanks to Damian Shiels for providing the names.
Around 170,000 Irish-born soldiers fought in the American Civil War. Of these 150,000 fought with the Union and around 20,000 with the Confederacy. Unsurprisingly, in those tumultuous times, the Irish found themselves as divided as the people of the great land in which they had rebuilt their lives. Courage and Conflict tells the story of the Irish in the Civil War by explaining who they were and why they fought. It follows the careers of key soldiers, describes their battles and tells how the Irish often became a crucial component of the war effort for both North and South.

In the North, most Irish emigrants regarded their first duty as being to the country that had taken them in and they regarded the continuation of the Union as vital. Indeed, many Irish hoped that, by helping to preserve the Union, they would someday enlist American help in the creation of an independent Irish republic. The story of these Irish is a remarkable one, ranging from Bull Run to the Bloody Lane at Antietam to the epic days of Gettysburg and onwards to Appomattox. It tells the tale of Thomas Francis Meagher and the Union’s Irish Brigade, a formidable fighting force who would be torn apart during General Ambrose Burnside’s suicidal attack on the Confederate position of Marye’s Heights, Fredericksburg, in December 1862. The futility of Fredericksburg would burn itself into the consciousness of the Irish in America and would play a role in the darkest moment of the Irish involvement in the Civil War, the New York Draft Riots of July 1863.

Courage and Conflict also studies the Irish who fought for the Confederacy. By 1861 nearly 100,000 Irish had settled in the South and these Confederate Irish flocked to the southern banner. Like Patrick Cleburne, quoted above, they regarded the North as a vicious aggressor and these Irish regularly compared what they perceived as the North’s aggression against the South with England’s continued domination of Ireland. The Confederate Irish fought with remarkable zeal to protect their adopted homeland and some would become heroes across the South. Patrick Cleburne would win adoration as a general of brilliance and infamy for his plan to free the slaves and enlist them to fight against the Union. Another famed soldier was Richard Dowling from County Galway. In 1863, while commanding less then fifty (mostly Irish) men, he would win a startling victory over Union forces at the Sabine River. This victory prevented a Union invasion of Texas and was praised by a resolution of the Confederate Congress as ‘one of the most brilliant and heroic achievements in the history of this war’. These are just some of the extraordinary incidents that make up Courage and Conflict’s story of the Irish role in the American Civil War and of all the heroism and brutality which it entailed.
Return to Courage and Conflict