'If the whole body of lion anecdote, from the days of the Assyrian Kings until the last year of the nineteenth century, were collated and brought together, it would not equal in tragedy or atrocity, in savageness or sheer insolent contempt for man, armed or unarmed, white or black, the story of these two beasts.'

- An extract from the English magazine The Spectator, 1900 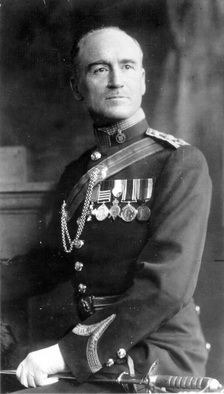 John Henry Patterson
In 1907, Teddy Roosevelt, then US President, welcomed one of his personal heroes to the White House. The man in question was John Henry Patterson from County Longford in Ireland, an officer in the British army and an international celebrity. Of all the stories in Courage and Conflict, the strangest is that of this officer who, throughout most of 1898, struggled to protect his men from two man-eating lions.

Born in 1867, Patterson joined the British army while in his teens and served a long stint in India before being sent to Africa in 1898. This was the high point of European colonialism and, at this time, the British and Germans were vying for control of the area of Africa that comprises modern day Kenya and Tanzania. In their ongoing battle for supremacy, both empires were trying to tame the vast wilderness with huge infrastructural projects. The most ambitious of these was the British plan to build a railway line from the port of Mombasa to the shores of Lake Victoria. Dubbed ‘the Lunatic line’ by British newspapers, the building of the railway progressed slowly until it had reached the Tsavo River, in what is today Kenya. This was where Patterson entered the story. An engineer by training, he was tasked with building a bridge over the river.

This seemingly straight-forward project was quickly complicated by the local wildlife. Over the next nine-months two man-eating lions turned the construction of the bridge into a horror story as they repeatedly attacked Patterson’s workers. The lions would break through the protective barriers that the workers had erected around their housing and seize their victim. They would often devour the unfortunate person a few yards outside the camp with Patterson and his men able to hear every crunch and broken bone. Patterson’s memoirs describe many occasions on which he had to collect the mangled remains left behind after an attack. All that remained of one worker were a few tattered items of clothing while his severed head lay a few feet away, the eyes wide open ‘with a startled horrified look’. Unsurprisingly, the surviving workers were panicked into stopping their exertions and Patterson was forced into a series of daring, at times reckless, escapades in his attempts to kill the big cats.

Night after night Patterson sat and waited in the bush while during the day he tracked the lions through the countryside. It would take him months before he succeeded and he very nearly lost his life on a few occasions. However in December 1898 he finally killed both lions within the space of a few weeks. His story was picked up by the press and Patterson became an overnight celebrity producing a best-selling memoir on his time in Africa. He would later fight in the Boer War and lead a contingent of Jewish troops during the First World War. He is still well regarded in Israel and his adventures in Africa were the subject of a Hollywood film, The Ghost and the Darkness, in the 1990’s. Patterson was a soldier for much of his life and while his story differs in many respects from the others contained in Courage and Conflict it is a remarkable tale of individual bravery amid an atmosphere of unremitting terror.
Return to Courage and Conflict