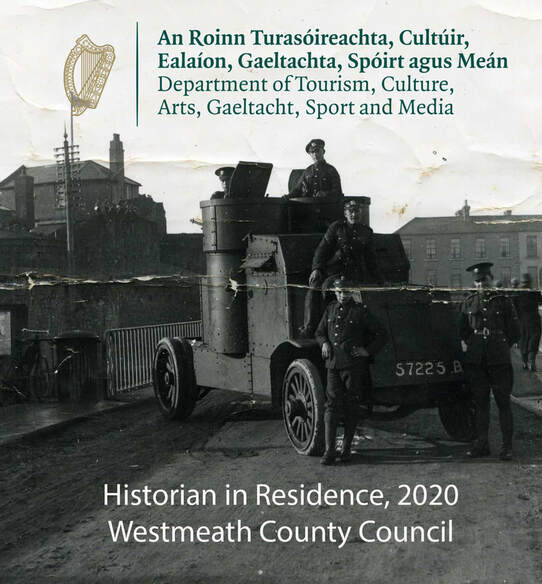 The Historian in Residence programme aimed to mark the centenaries within the county in the most appropriate fashion, given the restrictions that are in place due to Covid-19. I worked with the county’s heritage officer, Melanie McQuade, to ensure that the commemorative programme focused on County Westmeath and its environs. Ultimately, the goal of the residency was to provide the public with a trustworthy and enlightening source of information on Westmeath during 1920.

Blog
As part of the programme, I created a blog series that ran to almost 35,000 words and which included contributions from a range of historians. This is the first time that such detailed content on the history of Westmeath during the War of Independence, especially with regard to 1920, has been made easily accessible to the public. These blogs will serve as a permanent archive for the work undertaken by the Historian in Residence and guest authors.

Video and Radio Features
A series of Radio features (ranging from 90-seconds long to five minutes) were scripted and recorded in the studios of Midlands 103 by the Historian in Residence. Topics included: Cumann na mBan in Westmeath, reprisals in Athlone, the destruction of Westmeath Independent, Custume Barracks before the War of Independence, Alice Ginnell, James Daly and the Connaught Rangers, Ellen Chapman and the Westmeath Independent , and the shooting of Michael Burke. I also scripted and produced four short videos, covering different aspects of the period.