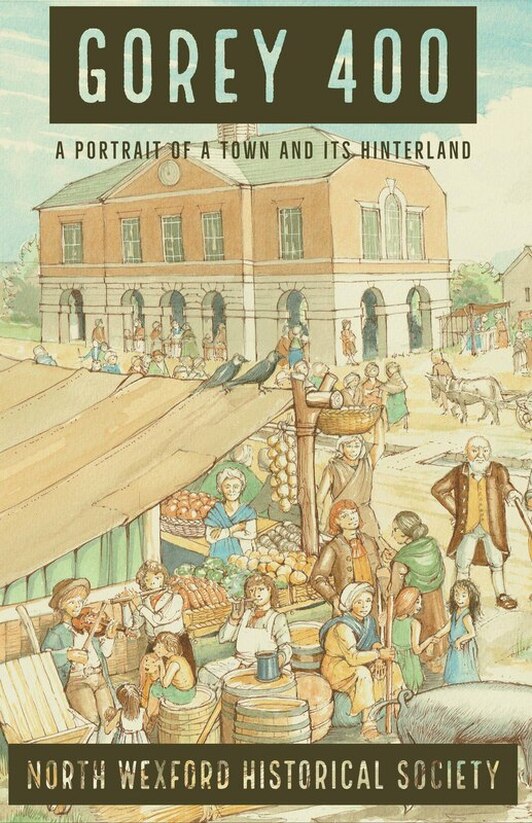 In 1619, King James I of England issued a charter to the town of Newborough. While the new name did not survive the test of time, the charter and events around it had a major influence on the history of Gorey and north Wexford. The foundation of the new town at Gorey (there was already an existing settlement in the vicinity of the Gorey Bridge/Clonattin area) arose in the aftermath of the plantation of north Wexford during which the lands of the old Gaelic families were declared as forfeited and distributed among the new wave of settlers, with small re-grants to the original inhabitants. This influx gave rise to a diverse population of Gaelic, some old English/Norman and new English settlers in the area and was a contributory factor in the upheavals of 1641 and 1798.  As well as influencing the history of the area, this diversity has also shaped the physical landscape of the town and the surrounding countryside, as well as the unique character of its people.

The book, ‘Gorey 400 – the History of Gorey and North Wexford’, is a joint production between the North Wexford Historical Society, the Byrne Perry Summer School and Gorey Municipal Council. It includes contributions on a vast array of topics from local geology to local artists. The book will be published in 2021, with Ian Kenneally as editor and with Wexford native and historian, Professor Daniel Gahan of the University of Evansville, Indiana, as associate editor.

The publication aims to build on the work of a diverse range of scholars who have written about north Wexford within the wider context of Irish history. A superb collection of authors - local, national and international - has been assembled. The various contributions will be accompanied by many photos, maps and illustrations that will showcase the story of north Wexford in a manner that will be properly contextualised and in a style that is accessible to a wide audience.